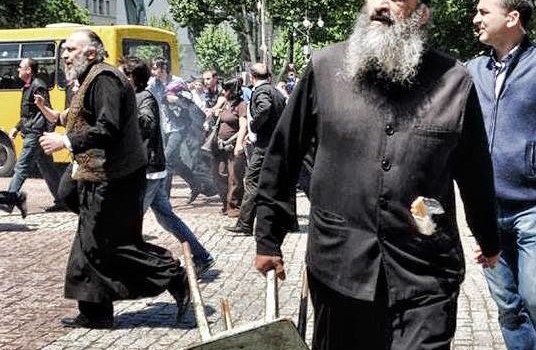 The IDAHO Committee is concerned about the anti-gay protests in Georgia’s capital Tbilisi
Today LGBTQ activists gathered in Pushkin Park, Downtown Tbilisi, to mark the International Day against Homophobia and Transphobia (IDAHO). The peaceful gathering was disrupted by a rally of thousands of anti-gay activists and representatives of the Georgian Orthodox Church.
Around 17 people, including police officers, have been injured as a result of a violent attack on the LGBTQ activists.
The anti-gay protestors blocked the LGBTQ activists’ way to the bus, using verbal and physical violence against them and trying to break the bus windows.
The anti-gay activists gathered in downtown Tbilisi hours before the scheduled gay-rights event. The protesters held up banners reading “Stop Homosexual Propaganda in Georgia, Radio Free Europe reports.
Following Georgian Prime Minister Bidzina Ivanishvili’s statement on May 15, saying LGBT people “have the same rights as any other social groups” in Georgia, Leader of the Georgian Orthodox Church Ilia II condemned the LGBTQ rally, urging authorities to undertake measures against the “insulting” actions of gays.
A member of the Council of Europe and signatory to UN conventions, Georgia has ratified and signed documents and treaties prohibiting discrimination on the grounds of sex and sexual orientation. Besides, Article 2 of the Labor Code prohibits discrimination on the grounds of sexual orientation and gender identity. Nonetheless, the fundamental rights of LGBT persons, particularly the right to peaceful demonstrations, are constantly violated in Georgia.
Standing in solidarity with LGBT activists and their supporters in Georgia, The IDAHO Committee calls upon local, regional and international human rights organizations, agencies and other European institutions to take a stance condemning the gross violations against LGBT persons and their allies in Georgia, holding the initiators of the violent anti-gay demonstrations accountable for their actions.
On the International Day against Homophobia and Transphobia, LGBT people all over the world should fully enjoy their right to raise their voice for acceptance, equality and non-discrimination, not being harassed, threatened and persecuted by their fellow citizens. Therefore, the IDAHO Committee urges the Government of Georgia to protect the well-being, security and rights of LGBT persons and undertake measures to eliminate the hate speech, religion-based discrimination and negative representation of LGBT people.

WHICH COUNTRY HAS THE MOST EVENTS PLANNED SO FAR FOR MAY 17?.

FIRST OPENLY LESBIAN LATINA JUDGE APPOINTED TO FEDERAL COURT IN THE US.