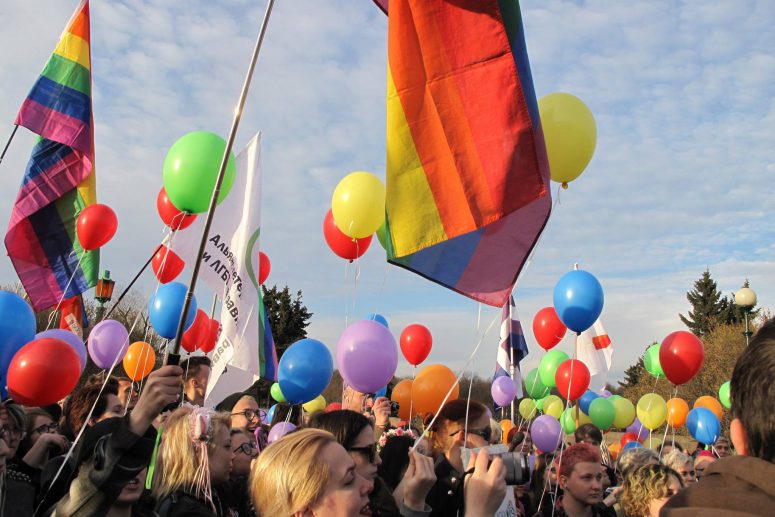 Today, the unexpected happened! Over 300 LGBT people and allies celebrated the International Day against Homophobia and Transphobia on Marsovo pole, the picturesque field in the center of Saint Petersburg; unimpeded, and under police protection.  This became the first successful LGBT public rally since at least the beginning of 2016,  when the situation with freedom of assembly for LGBT people sharply deteriorated.
And yet, this year especially wev feared a completely opposite scenario.  In sharp contrast to 2014-2015, beginning in the early 2016, every attempt at rallying with rainbow insignia in St. Petersburg was curtailed, participants detained. For IDAHO 2016, Coming Out applied 12 times to receive permission to rally, 12 denials received from the city administration,  each time with a clearly made-up excuse.  The administration’s intent was clear –  to not allow us to demonstrate. The courts, on their part, interpreted the administration’s lack of permission as “not a ban”, therefore “not preventing organizers from realizing their rights”. Last but not least, the police would use the administration’s position to detain rally participants unlawfully. This year, we decided to take this game of cat-and-mouse with the city administration, the police, and the courts to its logical conclusion. We applied for permission (got denied), went to court (court said – not a ban), and then sent the court’s decision to the police, called them, faxed them, asked them for meetings, called the ombudsman of Saint Petersburg and asked him to call the police, called them again, etc., throughout the two weeks up until the day of the rally.
And then a miracle happened!  Despite the fact that there was a “mass cultural and sports event”, which the city administration organized specifically at the exact spot we were planning to use, despite the fact that we didn’t have a permission slip from the administration to hold the rally, the police was there to protect, and not detain.  Moreover, at a certain point during the rally, two counter-protesters from the “National Liberation Мovement” who attempted to interfere with the speeches by blasting loud music and singing patriotic songs, were thwarted by the police.
Under the slogan “Time to speak!”, we spoke about the right to life and how silencing a whole group of people can lead to mass incarceration, torture, and murder, about the importance of self- advocacy and empowering each and every member of the vulnerable communities, about health and self-care. Igor Kochetkov of the Russian LGBT Network, Johnny Dzhibladze of Coming Out, Alexey Sergeev of the Alliance of Straights and LGBT for Equality, and Yelena Kostyuchenko of the “Novaya Gazeta”  newspaper addressed the participants. The rally went to the fullest extent of what was planned, and 300 LGBT people today had a chance to openly rally for their rights in their city.
Yosef Kristian,  this year’s rally’s coordinator: “It’s difficult to draw any conclusions in our context,  when so much depends on the political will of those in power.  But one thing I feel today for sure – we have to stubbornly continue doing what we’re doing, despite setbacks and one day. Our strategy is “constant dripping wears away a stone,” and today a little chip of that stone fell off.”
www.comingoutspb.com
Vicky May 18, 2017
TOP NEWS
Russia 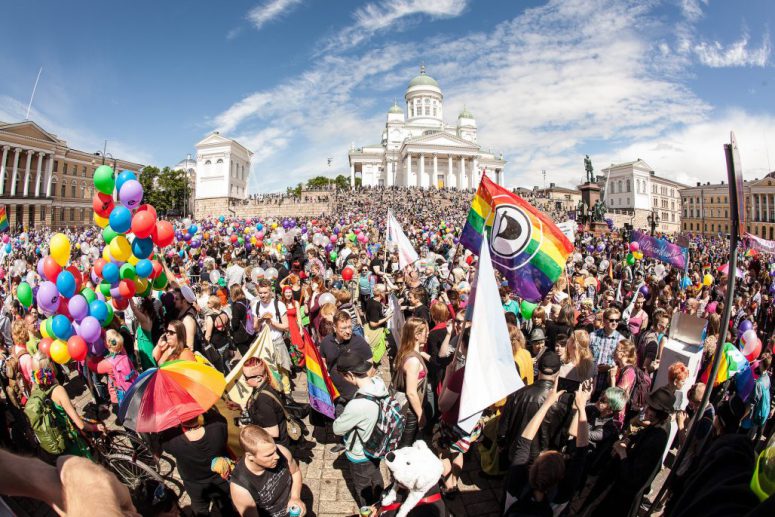