The annual landmark in global mobilisation for LGBTI Human Rights now stretches over a full week of worldwide action –  Over 1000 events in 120 countries – Many allies join in, from the UN to FC Barcelona.

This article provides a general overview of highlights and trends.
For details, visit dayagainsthomophobia.org
Please also have a look at our reports and photo galleries on Facebook
And for a more detailed feed on all significant IDAHOT events and declarations, follow us on Twitter
——–

In many countries around the world, IDAHOT has now evolved into a full week of action, often interweaving festive, cultural and political actions.

Some events are truly huge, such as Pride marches in Brussels, Berlin, Santiago de Chile, where 50 000 people marched to advocate for a gender-identity law, Caracas, la Havana,  where the countries’ first symbolic same-sex marriages were publicly performed, and many more.

Many iconic building light up in Rainbow colors, from Bridges in Brisbane or Newcastle, to Bangkok or Brussels city hall or UK intelligence service headquarters. Over 300 rainbow flags fly over city halls throughout Belgium. At least as many in the UK too, with over 100 in Nottinghamshire alone and more than 36 municipalities and 10 embassies  in Chile. Australia also boasts a massive participation, with  Sydney City Hall raising the flag amidst a range of countless community events, school interventions or cultural initiatives around the country. Hundreds of events will also mark the Day in Canada and Brazil, which are also among the historically most active countries for May 17.

Many important reports and studies are released highlighting the legal worldwide situation, the legal and social situations in Europe or the level of hate crimes directed to Trans people worldwide.

But many event will also be of smaller size, from community cultural events and parties, film screenings, church services, lectures and conferences, and much more. Europe will once again be bustling with colorful Rainbow Flashmobs organised in at least 12 bigger cities across Germany, 10 in Russia in spite of the legal bans (with StPetersburg proudly announcing the biggest ever public LGBT event in Russia), in Ukraine, Greece, Bulgaria, and more.

In Asia, at least 40 events will be held in Indonesia. Cambodia and the Philippines will be particularly eventful too.

In Latin America, all countries but one have reported a programme of action for the IDAHOT week, almost always culminating with a Pride March.

In Africa too, activists will go online and have social events in Uganda, Nigeria, Liberia, Botswana, Kenya and most of Southern Africa to share stories of LGBT people and break the wall of silence.

Early estimates are that over 1000 events reaching over 120 countries take place again this year.

Whatever the size, the symbolic importance of each event is tremendous. Not just for local activists but for each and every member from sexual minorities, and all their friends. Because each event is a step in the global recognition of our right to live and be respected in our diversities.

The Day  once more provides an important space for the LGBTI community to be visible. And, specifically with this year’s focus issue on this focus, to provide evidence of the effects of homophobia, transphobia and biphobia on the day-to-day lives of LGBTI youth

With the name of the day now formally mentioning biphobia, many stakeholders now also include this specific issue into their IDAHOT discussions. And intersex issues also increasingly make it to the light. Both these evolutions build on the contribution made in recent years by the Transgender movement to deconstruct the gender and sexual binary, on which the opposition to sexual and gender diversities mainly rests.

Throughout the world, thousands of members of the LGBTI community share their stories, their writings, their pictures, or simply raise their voices as a visible part of their society. In many countries selfie campaigns, video contributions or publications of personal testimonies mark the IDAHOT campaigns. The Day also successfully manages to be an important window of opportunity for groups living in violently homophobic contexts. Actions are taking place in at least 36 countries of the 76 where homosexuality is illegal, offering a rare moment for visibility, occupying virtual spaces when this is the only option.

But it is equally a Day to rally the support of allies!

Indeed official support keeps increasing. Countless public authorities take action; UN agencies almost all participate in activities at some level, often with declarations from the highest levels; On Times Square, the UN Free and Equal campaign had their special IDAHOT video screened for a full day on giant screens. Heads of UN agencies and Special procedures also issued statements. Over 200 delegates from institutions, members countries and civil society met in Montenegro for the annual intergovernmental IDAHO Forum. From the US, public support came from the highest levels, with statements from Pres. Obama and Sec. of State Kerry and over 60 congresspeople introduced a resolution recognizing the Day.

Embassies of many countries support local actions in difficult contexts. In the UK specifically, Police stations, County authorities, medical facilities, schools and universities and many other public and private bodies now routinely (but always passionately!) mark the day. Corporations issue statements and policies for their LGBT staff and Transport For London even had its first Rainbow Cab hit the city streets to celebrate IDAHOT.

Support from influential opinion leaders is also growing. In Lebanon, local TV celebrities participated in a video calling for the decriminalisation of homosexuality. In Latin America cartoonists took to their pencils while Youtube celebrities shared their message through video.

The world of sports also increasingly steps in, with Rugby legends or FC Barcelona taking specific actions for the Day.

This year, the support from allies is particularly visible around the global focus issue on LGBTI Youth, with major international groups joining over a ‘Thunderclap’ campaign and many Youth organisations taking special initiatives.

But beyond the high level mobilisation and its wave of visibility, individuals too take ownership of the Day.

A couple from Trinidad and Tobago organised their honeymoon to coincide with the day. A rainbow cake ordered for IDAHOT in Ireland, and turned down by the bakery, resulted in a thunderstorm and legal action. These are the best signs that the Day has become a landmark for all and now truly belongs to everyone!

Like every year, some IDAHOT actions face opposition, all too often with shameful violence. But activists increasingly find creative ways to avoid clashes and still be heard by occupying all possible spaces.

Sometimes too activists successfully take it to court, as is the case in Georgia: when let down by police protection when the peaceful IDAHOT 2012 march was brutally attacked, activists took it to the European Court for Human Rights, which just ahead of the IDAHOT 3 years later  condemned Georgia for “degrading and inhuman treatment in a discriminatory manner”. And the IDAHOT 2015 gathering was eventually pulled off. With secrecy, with police protection, but successfully!

From one IDAHOT to the other, the message is clear: we shall not be silenced! 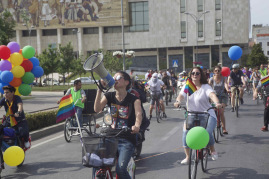 Hundreds at the 4th LGBTI Pride Event in Tirana for IDAHOT 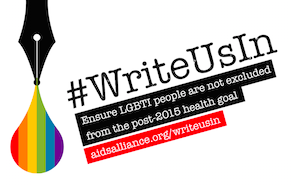